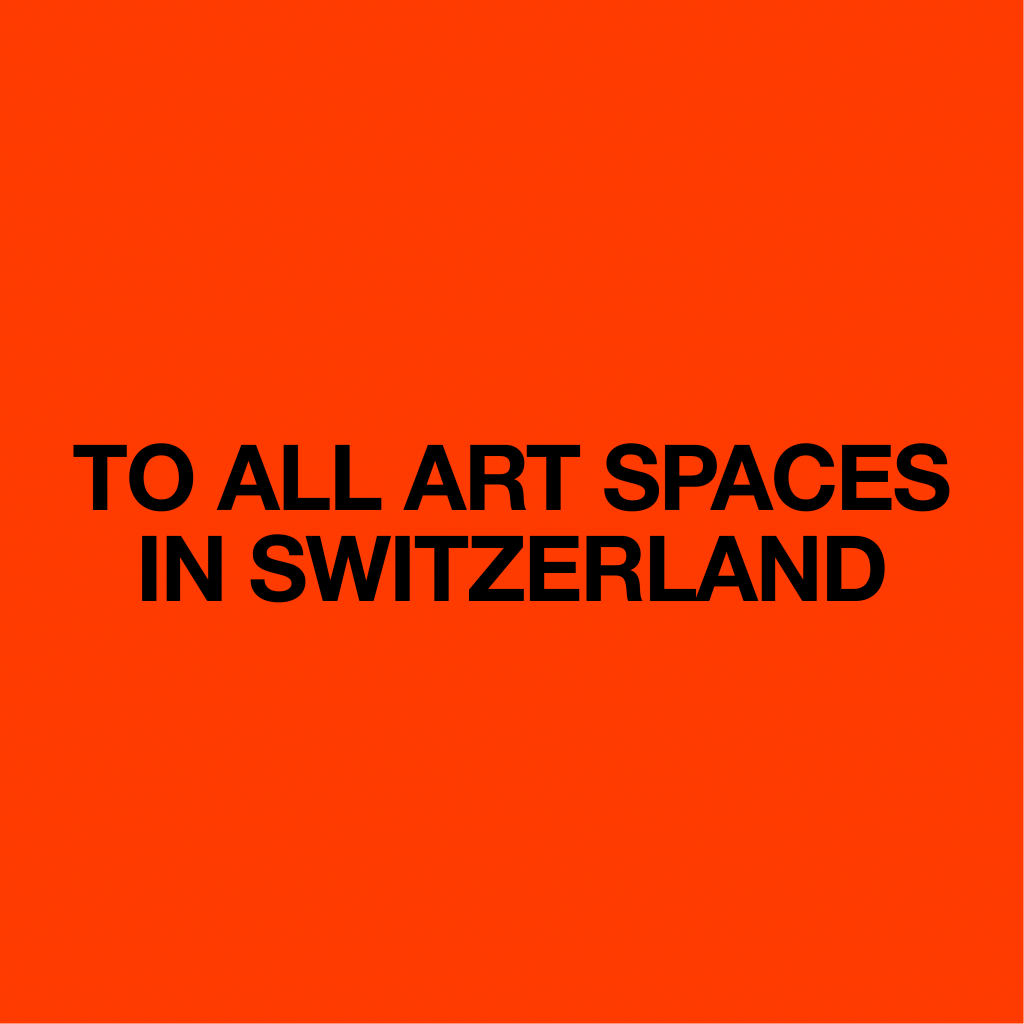 On 9. June 2020, we, more than 60 Black art and cultural workers across Switzerland, collectively penned an open letter. At the time, there was a massive global wave of solidarity with the Black Lives Matter movement. Our open letter was specifically addressed to the over 76 Swiss art spaces that had participated in what is now known as #BlackOutTuesday.[1]

In our letter, we expressed that while we appreciate the signaling of support, we are aware that what is now defined as “social media activism”[2] does not usually translate beyond distanced, inactive PR statements. We noted that structural racism—which can surface as microaggressions, explicit racism, gaslighting, exclusionary institutional attitudes and policies, centering whiteness, police brutality, hate crimes, demand for free labour, exotisation and (hyper)sexualisation etc.—is very alive and well, here in Switzerland. As a result, in our daily lives many of us have experienced racism in our professional engagements and interactions as artists and cultural workers.

The addressed art spaces were encouraged to invest more actively in the necessary process to become more anti-racist. As a tool, we included a set of questions created to support the necessary work of identifying biases within one’s own structures. We demanded that our addressees share the answers to these questions publicly through their own channels in an effort to encourage other art spaces to practice transparency and accountability.

Since 9. June 2020, out of the 76 addressed art spaces, each of whom had previously declared their solidarity with the Black Lives Matter movement, only 3 have shared their answers publicly. The other 73 institutions provided a panorama of frustrating reactions. This included expecting our free labor in the form of informal meetings instead of soliciting paid consultants on deconstructing racist structures. The most common response by far was simply no response at all.

Unfortunately, this came as no surprise. We have long been familiar with the structural racism and the ongoing silence surrounding white supremacy and anti-Black racism in Switzerland. It is nonetheless very disheartening. In addition, we notice that many artist-run spaces often feel exempt from these conversations as they operate very informally. We are exhausted by the persistent lack of accountability.

Our society in its current form relies on anti-Blackness that has seeped into its structures and culture in a way that cannot be compared to the racism experienced by non-Black People of Color or xenophobia faced by many people of non-Swiss heritages. Oppressions are multifaceted and complex. They need a precise vocabulary. This is why we insist on specificity in our vocabulary by distinguishing anti-Black racism and other forms of discrimination. We do this in an effort to shed light on both the necessary solidarity between Black people and non-Black communities of colour, as well as on the true depth of ever-pervading anti-Blackness. We deploy our understanding of anti-Blackness in order to acknowledge and address intersections of Blackness as experienced in Switzerland. This includes intersecting experiences of Black people, those being colorism, ableism, xenophobia, misogynoir, misgendering, cisheterosexism, classism, transphobia and legal status to name some. Blackness is not a monolith.

Since June 2020, many art spaces have shown their willingness to engage with race as a topic, which can be observed by the significant increase in panel talks and similar public events. We would like to highlight that harmful decisions have been made at several events at the expense of Black art workers. We have encountered a general reluctance to address structural anti-Blackness, which we experience as violent. Individuals among us have had to justify their signatures on our previous letter and have faced defamation. This emphasises and reiterates the need for a deeper confrontation with structural blindspots rooted in white supremacy and resulting in anti-Blackness. We won’t accept anti-racism to be co-opted in an attempt to raise the value of one’s public profile.

Genuine and profound work can only be done if we, as individuals and constituents of institutions and societies, move beyond defensiveness and guilt. It remains an urgent, necessary process that starts with the commitment by each one of us to unlearn our internalised anti-Blackness, which includes behaviours and actions that are informed by a socialised perception of whiteness as the default. This is because we are born into an inherently racist, anti-Black society. Unlearning this is our most urgent and crucial demand. It is the necessary foundation to all following demands towards material change, as it applies:

In our focus on anti-Blackness, it is imperative to pay particular attention to colorism. Dark-skinned Black people with less proximity to whiteness need to be centered in all anti-racist intentions. This includes active assessment of who is given access and platform.

We demand that similar steps are put into place to address bias against all those who suffer under white supremacy and its intersecting oppressions, which include ableism, classism, fatphobia, homophobia, cisheterosexism, ageism, xenophobia, religious discrimination and transphobia.

The work ahead of us remains clear: practices and visions are either oriented towards antiracism or they are not. One can be complacent with the current colonialist system or one can engage in the active process of challenging racist structures and the injustices they perpetuate. There is no in between and it remains an emergency.

In closing, we are artists and cultural practitioners looking to pursue our work in the careers we have chosen. This letter comes from a need for safer professional settings that are free from discrimination. This letter is not a part of our artistic practices.

Black artists and cultural workers based in Switzerland who would like to add their signatures shall contact us: blackartistsinswitzerland@gmail.com

[1]#BlackoutTuesday was a collective action to protest racism and police brutality, staged on social media. “What began as an attempt by two music insiders to pause business as usual across the industry on a Tuesday, in response to the protests sweeping the nation, broadened and morphed overnight on social media into a less focused action, resulting in a sea of black boxes across Instagram and other platforms.” https://www.nytimes.com/2020/06/02/arts/music/what-blackout-tuesday.html

[3] Julia Wissert, Sonja Laaser, Banafshe Hourmazdi, Golschan Ahmad Haschemi have developed a draft anti-racism clause tailored specifically for theatre context under German jurisdiction: https://www.antirassismusklausel.de. This can be used as a model and adapted to the contemporary arts context in Switzerland easily.

[4] Equity encourages the use of custom tools that identify, address and correct inequality and resulting access barriers whereas an approach of equality, though based on the belief that everyone should be treated equally, disregards structural barriers and therefore often perpetuates existing inequality. 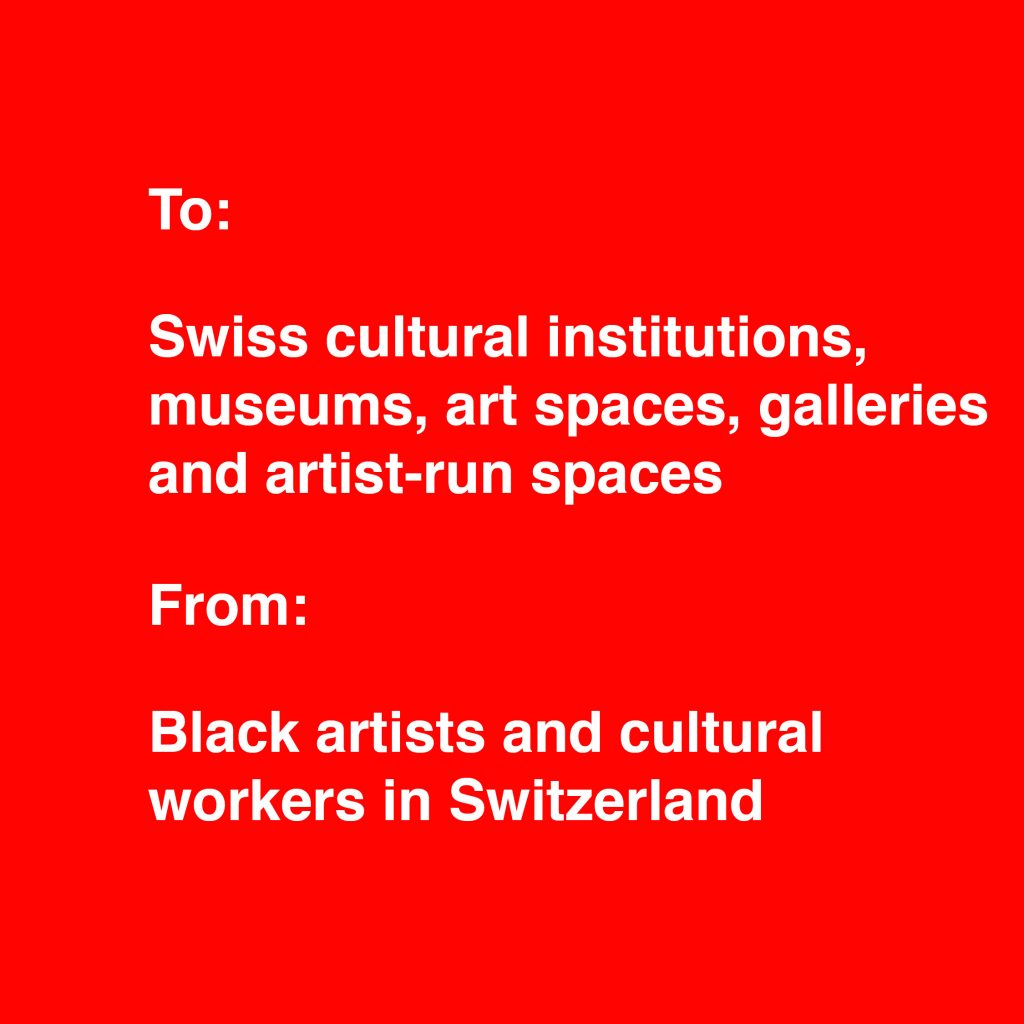 How will you be proactive in supporting Black artists and cultural workers in the future?
How are you actively dismantling white supremacy and racial bias within the structure of your institution?

In the wake of the brutal police killings of Breonna Taylor, Tony McDade, George Floyd, Ahmaud Arbery and David McAtee over the last  weeks in the USA, we’ve observed a wave of outrage across the world. Last Tuesday, many institutions and individuals decided to post black squares or other comparable virtue-signalling content on their social media as a sign of solidarity. We would like to invite you to have deeper engagement with anti-racist practices so that the black square doesn’t become an act of performative activism. The aim would be to strengthen the relationship between Black artists and cultural workers with institutions here in Switzerland.

Although the outrage began as a public indignation against police brutality, and more broadly racism against Black people in the U.S., white supremacy is a global problem. It is one that we too face in Switzerland.

Within the last years, at least three Black men have been killed by the police in Lausanne and Bex: Mike Ben Peter, Lamine Fatty and Hervé Mandundu. None of their murderers have been convicted and therefore no justice has been awarded to these men or their families. One must also bring to light the fact that many assaults due to racial profiling by the police rarely end with the police being charged. The most prominent cases are those of Mohamed Wa Baile and Wilson A.

While these examples speak to some of the most extreme forms of racism, we must acknowledge that anti-Black racism is a direct derivative of white supremacy: an oppressive system of beliefs and discriminatory set of biases that is inherent in all structures of the Western World.

As Black artists and cultural workers who are professionally active in Switzerland, many of us have experienced racism and discriminations throughout our careers at the hands of art institutions and organisations of various scales. As a consequence of speaking out about these experiences, many of us have received threats and/or intimidation as a response. Some of us have spitefully had our professional reputations damaged. Much to our shock, these violent encounters have not decreased since diversity has become a common term and standard to strive for in recent years in the international contemporary art/cultural world.

Whether it be the police force or the art museum, there is seemingly no limit to the lengths and depths to which racism will go to perpetuate itself. It should therefore come hardly as a surprise that we are particularly frustrated and dismayed by seeing some of these same institutions now claiming anti-racist stances on social media.

We assume that in posting the black square or other comparable content, your desire was to signal outwardly that your institution does not align with racist practices. We will now pick you up on this: We hereby ask you to be truly accountable and take action beyond the stage of social media. We ask you to implement real, tangible change and to become section leaders when it comes to anti-racist practices in the arts and culture landscape of Switzerland.

We have compiled a set of questions to self-evaluate your practice of dismantling structural racism and white supremacy within your own structures. These can function as a guidance to bring light to which areas of your work that need more dedicated efforts. We urge you to take the time to truthfully respond to these questions and take all necessary steps towards being able to respond positively to each of these questions with immediate effect:

*In all these questions we primarily mean Black artists and cultural workers based in or active in Switzerland. As a second step, you could ask yourself the same set of questions regarding international Black artists.

With these questions as a guidance for sustainable change, we encourage you to share your answers publicly as an example for best practice and transparency with your audiences, to set goals for improved practice and regularly monitor your commitment to being a fundamentally anti-racist organisaton.

Anti-Black Racism is just one of the oppressive and discriminating manifestations of white supremacy. Others include xenophobia and racism against non-Black People of Colour. Although our letter focuses on the issues related to anti-Black racism, we demand that similar steps are put into place to address bias against all those who suffer under white supremacy. We encourage you to also acknowledge the intersections of white supremacy with ableism, sexism, classism, homophobia and transphobia and to put all necessary measures in place to ensure the contemporary arts and culture in Switzerland will become sustainably more diverse and inclusive beyond outward-facing virtue-signaling.